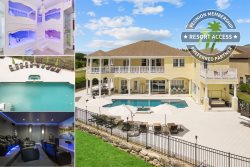 If you are into Sci-fi, comics and the like, or have a family member who is, you know that MegaCon is a pretty big deal. This mega convention (that’s where it gets its name), is a speculative fiction conference that caters to the comic book, sci-fi, anime, fantasy, and gaming communities. And until 2016, when Tampa decided they needed one, it was held exclusively in Orlando.

MegaCon runs May 24–27, this year, so mark your calendars and book your luxury vacation villa now because this is one cool convention. Also, get started on those costumes (cosplay), because dressing up as your favorite character is a big part of the fun. There is even a kids’ costume contest for your little Thor or Sailor Moon to shine!

This year, celebrity guests include film star Jeff Goldblum (Jurassic Park, Thor: Ragnarok, Independence Day) making his first-ever appearance at MegaCon. Paul Reubens, who created the iconic character, Pee-wee Herman, will attend as well, and so will China McClain, Nafessa Williams and Cress Williams, all from Black Lightning, the DC Comics-based superhero television show. And let’s not forget the talented comedian, Catherine Tate, whom I love on her self-titled UK television show, and who is also known for her role on Dr. Who.

For the Princess Bride fan in the family...and every family has one...Cary Elwes (Westley) will be there, as well as Prince Humperdinck, Chris Sarandon. And here is where I’d spend my day at MegaCon: right in front of wherever Jason Momoa (aka, Aquaman, Conan the Barbarian, and overall hottie) will be signing autographs. There is a professional photographer there to take photographs of you and your family with the actors. There will also be a host of guests in the comic-creating genre. Plus a Power Ranger and even a Wookiee. Here's an entire list of this year’s stars.

Aside from photo ops and autograph sessions, you’ll enjoy the Cosplay Photo Park that offers various themed backdrops. Check out Artist Alley where you will find all of your favorite pencillers, inkers and writers. Unwind at the Kid Zone & Family Lodge for a moment to rejuvenate. Or, throw caution to the wind and get that tattoo you never knew you wanted. Head to the Ink-Fusion Empire Tattoo Pavillion. These artists are part of the only professional tattoo program that has a license agreement with Lucasfilm LTD, and they work alongside the great Stan Lee among other celebrities. Space is limited so if you want a special, one-of-a-kind (and permanent) souvenir from MegaCon and your Orlando vacation, book your session soon.

If ink is not on your memento list, MegaCon offers over 400,000 square feet of shopping space. Over 500 retailers from near and far are part of MegaCon, specializing in everything comics, anime, gaming, science fiction and/or horror. Whatever it is you need, whether it’s comic books from any era, original artwork, graphic novels, memorabilia, DVD’s, videos, games, toys or t-shirts – you will find it all here.