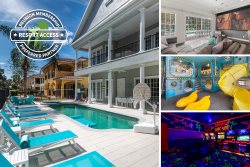 As if the Orlando-area parks were not awesome enough, there is always room for awesome and beyond. More fun and excitement is coming our way in the new year. In fact, so many new and wonderful things that this blog will have to be a 2- or even 3-parter. Whether you have been to our world-class theme parks or have yet to experience them, with all these new adventures coming in 2019, you and your family are in for a real treat!

Islands of Adventure
Opening: This Summer

Massive thrill ride Dragon Challenge, aka Dueling Dragons, aka Fire and Ice, is no more. Universal is building a brand-new roller coaster that is much more family-friendly to your little Muggles. This coaster is still unnamed, but it will feature characters, creatures and locations that are not represented in The Wizarding World of Harry Potter as of now. This is the newest Potter ride in five years and I'm certain it will be a real (younger) crowd pleaser.

Set to become Hollywood Studio's flagship attraction, Mickey's first ride at any Disney park is taking over the site of the Great Movie Ride. And is going to be awesome! I mean, Disney without Mickey is like Frozen without Anna. Mickey and Minnie's Runaway Railway will feature a catchy theme song written exclusively for the ride and the extremely talented Disney team are poised to make sure the visuals and narrative are pitch-perfect. One outstanding feature of this new ride will be a glasses-free 3D effect that Disney refers to as 2½D. Whether D stands for Dimension or Disney doesn't matter, because everything they do is utterly remarkable.

Terminator 2 3D: Battle Across Time (T23D), the second-oldest ride attraction at Universal Studios, closed down nearly 2 years ago to make way for a new experience. But even after all this time, all Universal has to say about it is that this new adventure will be an "all-new live-action experience based on a high-energy Universal franchise." Well, sounds great to me!

In other words, T23D, which was heavily dependent upon audio-animatronics and 3D film footage alongside the real actors, is going to be replaced by a predominantly live-actor-driven attraction. Interactive with the audience? Not sure yet, but you'll be the first to know...after me, of course.

You and the family can go behind the scenes and visit areas never before opened to the public. SeaWorld's renowned veterinarians and animal experts offer an intimate look at the day-to-day care provided to the park's animals. You also get to meet the SeaWorld Rescue Team and learn more about their life-saving work. This informative and entertaining event runs on weekends, twice in 2019, January 12–27 and again May 11–19.