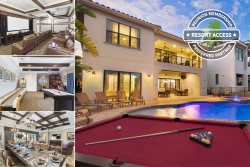 There seems to be no end to the number of new rides and attractions coming to our world-class theme parks in 2019. This blog may turn into a series soon! Here is a continuation of all the wonderful and exciting new experiences you and your family can enjoy on your Orlando vacation.

In a galaxy far, far away there are Klingons putting the finishing touches on a new land dedicated to the planet Batuu, its inhabitants and its various visitors. In 2019, you and your family can be those visitors. Coming attractions include a Millennium Falcon ride, shows, several dining locations, and other amusements based on popular Star Wars characters and scenes. If you or a family member are a die-hard Star Wars enthusiast, this is a don't-miss. Star Wars Galaxy's Edge is set to open this summer but wouldn't it be funny if they opened on May 4th so everyone can exclaim "May the 4th be with you" all day without sounding silly? Golly, I'm clever.

There is a term to describe a person who has an over-enthusiastic love affair with roller coasters and theme parks. They are called Goons. Fanatics wear theme park-related outfits called Gooniforms! Is there a Goon in your family?

A Space Restaurant at Epcot

While we are on the subject of space...this summer, you can expect to see a brand-new space-themed restaurant which will be installed, of course, right next to Mission: Space. There are still not a lot of details on it but the concept art is telling. You will be made to feel as if you have left Earth and are dining on a space station in its orbit. I wonder if Tang will be on the menu...

Less of an entertainment ride, more of a system of travel between parks. The Disney Skyliner is a giant gondola system that will link Epcot, Hollywood Studios and more. Most of the cabins will be themed with classic Disney characters and the boarding stations will meld seamlessly with their surroundings. It's a fun and easy way to hop from place to place. The Disney Skyliner is expected to open this summer and will most likely expand to include other destinations.

This live show at Sunset Showcase, located near Rock 'n' Roller Coaster, will bring you face to face with racing legend Lightning McQueen as he gets help from his friends, Mater and Cruz Ramirez because, apparently, things tend to go wrong for ole Lightning. It will be shown on a large screen almost two stories tall and 205 feet long so you and the kids can immerse yourselves in the brand new storyline featuring never-before-seen animation. It's high-octane fun in the middle of the Cars universe!

After visiting the parks be sure to head back to your comfort zone. Book with Reunion Vacation Homes today!