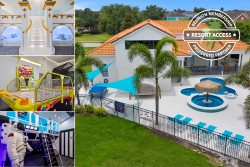 In continuation of the previous blog of April events, this includes one Easter service and a few live events along with what’s new this spring at the parks. Spring is the time of year to get rid of the old and usher in the new, and our world-class theme parks are doing just that! Here are a few new family adventures that are starting up this spring.

The brand-new Alien Swirling Saucers and the Slinky Dog Dash rides join the long-running Toy Story Mania in an immersive land that’s based on the Disney/Pixar animated films.

Star Wars: Secrets of the Empire at Disney Springs

In this hyper-reality experience, you and up to three teammates travel to the planet Mustafar on a mission of critical importance to the Rebellion. May the force be with you. Sorry, I had to say it.

This wild ride will get your motor running with "the family" from the blockbuster Fast & Furious film franchise, plus more than a dozen authentic replicas of the film's hottest vehicles.

This lagoon show combines music with light and water, and features characters from Jurassic World, Fast & Furious, Despicable Me and other hit movies. Described as a “one-of-a-kind spectacle.”

For the thrill seeker in your family! This four-person raft ride features high-power water jets, a giant translucent sphere, and an open-air halfpipe.

Climb aboard an eight-person raft for a wild journey down a lost jungle river and the ruins of an ancient civilization. Get ready to get soaked!

This Easter service is outside held Orlando but worth a visit if you are in the Central Florida area. It’s the Easter Sunrise Service at Bok Towers located in Lake Wales, approximately an hours drive from your luxury vacation villa. This special service offers Easter morning worshipers free admission to greet the dawn while listening to their impressive 60-bell carillon. An Easter buffet will be served in the Blue Palmetto Café afterward. Easter Sunday, April 21 starting at 7 AM.

This dance dynamo comes to the Dr. Phillips Center for the Performing Arts in downtown Orlando on his first-ever solo tour. If your family is a fan of World of Dance (whose isn't?) treat them to this floor-burning extravaganza. Thursday, April 11, 7:30 PM.

This is the story of the Mad Hatter after he is banished from Wonderland and finds himself in 1921 London. Will he make it back to Wonderland in time to save Alice from the Red Queen's curse? Find out...the weekend of April 26 – 28 at the Dr. Phillips Center for the Performing Arts in lovely downtown Orlando. Make a night of it at a local restaurant and then a walk around our fair city.

Explore what else Orlando has to offer, Book Now with Reunion Vacation Homes today!