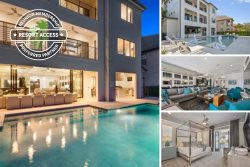 It's hopping! There is a plethora of restaurants and smaller venues that offer live music. Central Florida is home to a lot of talented artists who perform all over the city. From downtown, to tourist-centric International Drive and Sandlake Road (Restaurant Row), and many areas in between, you can find pretty much all genres of music–both well-known and obscure–every night of the week. Orlando's major venues are oft visited by famous bands and artists as well, and here is a rundown of our top 3 concert halls.

Orlando's foremost arena, the Amway Center, opened in 2010. I can't count how many times I've been to this awesome dome over the years but every time I go, I appreciate its cleanliness, convenience, generous seats, great acoustics and the friendliness/helpfulness of its employees. I've been lucky enough to have experienced front row center seats and cheap enough to have hiked my way up to the nosebleed section to enjoy a concert. Still, no matter where I sit, the sound is excellent. Tip: Bring mini-binoculars. I never go to a show without them.

Amway Arena is home to our NBA team, The Orlando Magic, and its beloved multi-talented mascot, Stuff the Magic Dragon. If you get the chance to catch a game, do it. Talk about a fun night! Located in the heart of downtown Orlando, the arena is about 30 miles from your luxury villa but well worth the drive. Plus, you can make a night of it with a meal and cocktails at one of many nearby bars and restaurants.

The name says it all. The venue itself is cool because it's located at the Hard Rock Hotel at Universal Studios Orlando. And you never know who you may run into in the lobby. Once, out by the pool, I came across a few members of Guns N' Roses. I was stoked! The HRL concert venue, its size and acoustics are pretty good. The size is pretty spot on, in fact. Just intimate enough to really enjoy the show. HRL also hosts a monthly event held in the lobby area called Velvet Sessions which is a "rock'n'roll cocktail party." Your ticket includes complimentary themed cocktails, finger food and a great show by a major artist.

The Bard of Avon, William Shakespeare, hit the nail on the head when he said, "If music be the food of love, play on."

House of Blues is located in Disney Springs, only a short drive from your vacation villa. I consider this my favorite music venue in Orlando. Maybe it's the smaller, more intimate size and the homey, eclectic decor that tickles me. You can see not only fantastic world-class bands but several times a month, you can see bands that cover other artists, decades and genres. I go to HOB pretty often. Such a fun and cozy venue to order a bite at the bar (may I suggest the chicken fingers?), enjoy a cocktail and sing along to your favorite songs.