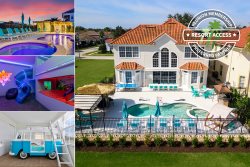 Simulation and Interactive Rides in Orlando

Recently, we reviewed the top 5 roller coasters in Orlando's theme parks and I wanted to give these stunning motion-based and interactive rides their time to equally shine. Each of these world-class rides are an experience to remember. Time to get your adventure on!

I googled this 3-D special effects ride to give you the best explanation of what you can expect and got a backstory that I simply did not understand. I found names like Optimus Prime, Evac, AllSpark, MegaTron, Grindor and StarScream–which, btw, I'm adopting as my new nickname. The thing is: If you know who these characters are, you're going to love this ride. If you have no clue, like me, you're still going to love this ride! That's how fun it is. It's up and down, loud and bright, and overall, very exciting. It does not matter if you understand who is who or what the heck they are doing. Height Restriction 40 in (102 cm)

Your little Space Rangers will love you for taking them on this slower, spinning ride. This interactive adventure continues the epic battle between Buzz Lightyear and Evil Emperor Zurg, as seen in the popular Disney Pixar Toy Story film series. And FYI, to add to the buzz, Toy Story Land is set to open at Disney's Hollywood Studios on June 30. This ride is for all ages and has no height restrictions.

As you wait in line, you pass scenes from the film and the one with the Worm Guys gossiping over coffee in the kitchen cracks me up every time. Once you are through to this motion simulation ride, your mission is to blast enemy aliens into oblivion. But beware, they blast back. This whole ride is a blast! You need a good eye and steady hand on your laser gun because the more points you get, the closer you are to becoming a full-fledged MEN IN BLACK agent. Good luck. Height restriction 42 in (107 cm)

The Amazing Adventures of Spider-Man (Universal's Islands of Adventure)

On this award-winning ride, you'll face a cast of Marvel characters as you soar above the streets, scale skyscrapers and battle bad guys. Experience vivid high-definition 3D projections, special effects including heat, mist, fire and lights, plus a great soundtrack for an unforgettable ride. This one also includes a 400-foot free fall and Spidey hitching a ride on your car. For comic connoisseurs, there's a cameo by legendary Spider-Man co-creator, Stan Lee. There is nothing here not to love. Height Restriction 40 in (102 cm)

Harry Potter and the Forbidden Journey (Universal's Islands of Adventure)

This story needs no introduction. Using a unique robotic-arm ride system, this adventure takes you on a tour of Hogwarts Castle. On your initial walk through, you'll hear a speech from Dumbledore and get directions from Harry, Hermione and Ron before boarding a "magical bench" to encounter the Whomping Willow, a horde of Dementors and even a Quidditch match. This experience is every Muggle's dream. Height Restriction 48 in (122 cm)