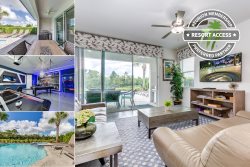 Sports are a big thing here in Orlando. We have our NBA team the Orlando Magic (I am a huge fan!) and, of all things you may not imagine Florida having, an ice hockey team who goes by the awesome name the Solar Bears. Since 2010, we’ve also had the extremely popular MLS (Major League Soccer) Orlando City “Lions” as well as the NWSL (National Women’s Soccer League) the Orlando Pride.

Its success has been overwhelming. Soccer is so big here in Orlando that the teams have their very own brand-new stadium with a seating capacity of 25,000. It was designed with the intention of creating the loudest and most intimidating atmosphere in Major League Soccer, with North America's only safe-standing supporter section and a low slanted roofline to amplify crowd noise. If that doesn’t scream, “Orlando loves sports!” nothing does.

If you are a sports fan and want to get in on the action while on vacation here, the Magic and Solar Bear season runs from October to April, and soccer season begins in March and runs through October.

Spring training is held in only two states—Arizona (the Cactus League) and Florida (the Grapefruit League). So we are particularly proud to offer this exclusive experience to our vacationers.

Take Me Out to the Ballgame

What Orlando does not have is our own baseball team so we’ve adopted Atlanta’s. The Braves have held their spring training in Champion Stadium at the ESPN Wide World of Sports Complex since 1998. It doesn’t matter if you are a fan of a certain team, just going to a spring training game is a memory-making experience. And at this sports complex you can do it in style.

Enjoy a plush, climate-controlled indoor suite ideal for groups looking to enjoy the game in the comfort of air conditioning or—if you’ve been trapped indoors all winter—try an outdoor open-air terrace. For smaller groups, keep your cool in a Cabana for four.

Fun statistic: Hot dogs are the MVP of concession stands across the country and since 2017, Nathan’s Famous is the first-ever official hot dog of Major League Baseball. The National Hot Dog and Sausage Council (yes, there is such a thing) has estimated that fans eat approximately 20 million hot dogs at big-league games during a single season. So, pile on the mustard and onions, and chow down!

If you are visiting the Orlando area between mid-February to around the first week of April, you’re in luck. On those days when the theme parks are just too much and you’ve had enough beach time, hop into the rental for a short road trip, relax and take in a game with the family.

Not a Braves fan? Check out these other Central Florida spring training locations that are within a decent driving distance from your luxury vacation villa:

Even if you are not a huge sports fan, it’s still worth the fun road trip and the memorable combination of American nostalgia, sunshine and camaraderie.