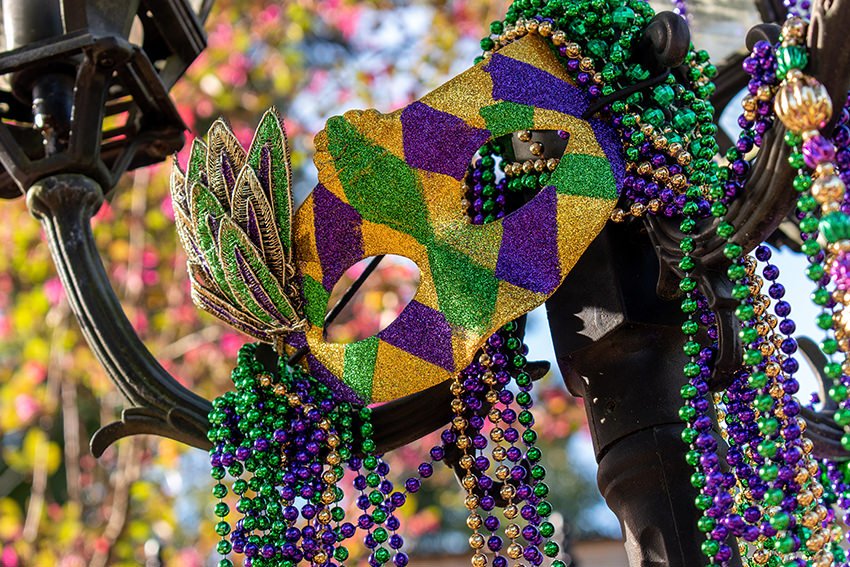 It’s that time of year again when you just have to let go and get down. The party starts on February 1, 2020 at Universal Studios Orlando and runs right through until April 2. It’s Mardi Gras and this is its 25th Anniversary Edition which means it promises to be the biggest and boldest Mardi Gras to date. Here’s what you need to know about this year’s festivities. Laissez le bon temps rouler!

Don your purple, green and gold, and celebrate 25 years of party at Mardi Gras, the annual celebration that brings the sights, sounds and tastes of New Orleans’ biggest party to Central Florida. Revel in this event’s signature highlight: its nightly parade, where colorful dancers, stilt walkers, and street performers strut their stuff alongside festive floats. This year’s theme is “Treasures of the Deep” featuring floats inspired by a Treasure Map, the Sunken City of Atlantis, Creatures of the Deep and a treasure-filled Shipwreck Island. Catch and collect as many beads as you can and wear them with pride.

What would the Mardi Gras party be without the delicious taste of authentic New Orleans Cajun and Creole cuisine? Indulge some of the bayou’s best dishes. Jambalaya, gumbo and beignets, anyone?

Certainly, you can’t have a great party without music so, on select nights, Mardi Gras presents some of the biggest names in pop, rock, country, R&B and more on their Music Plaza stage. You can catch live performances of Louisiana jazz, blues and zydeco bands throughout the festival’s run as well. Here is the concert lineup as of now so you can make your plans accordingly:

Experience the sensations of the Big Easy as the Big Apple (Universal Studios’ New York area) is transformed into New Orleans with the addition of the charming French Quarter Courtyard. The Mardi Gras 2020 festivities are included with your Universal Studios Florida theme park admission. Visit their website for all the details, as the parade starts at different times each night.

Universal Orlando Resort is not a far drive from your luxury vacation villa. After a long day at one of Central Florida’s most fun and popular theme parks, head home to the tranquility of your private and spacious villa to relax and plan your next day’s fun adventures.

We use cookies to ensure that we give you the best experience on our website. Privacy policy here. If you continue to use this site we will assume that you are happy with it. Ok
×