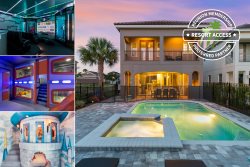 The Grinchmas™ Who-liday Spectacular is the centerpiece of the Grinchmas™ celebration at Seuss Landing™. It's a heartwarming live show starring the Grinch in the telling of How the Grinch Stole Christmas.

During the holiday season, Seuss Landing is decorated with the holiday charm and cheer of Dr. Seuss's Who-ville. The entire family will enjoy the hilarious hijinks of The Grinchmas™ Who-liday Spectacular, featuring a score by Mannheim Steamroller, the Neoclassical new-age experts in Christmas music.

You'll even have the opportunity to meet the maven of mischief himself. Line up for an autograph and, if you'd like, purchase a photo of yourselves with him. A few years ago, I was hanging out at Universal Studios Orlando and the Grinch was there along with Thing One and Thing Two. So, I was extra excited and wanted to have a picture with these beloved characters. And they obliged. Thing One and Thing Two were adorable, precocious little "things" as one would expect, but I was taken aback by the Grinch. What a jerk, I thought to myself. He was gruff and grumpy. It only occurred to me later that day that, of course he was a big old fuzzy grump, he's the Grinch! He stole Christmas, for crying out loud. I'd completely forgotten. Moral of this story is the Grinch is miserly, crotchety and petulant for sure, but underneath his green grumbling exterior, he's got a heart of gold.

Best Seats in the House

Seating for the Grinchmas™ Who-liday Spectacular is first come, first serve (no Express Pass access is offered, either). Depending on how busy the park is when you visit, you'll want to get in line 15 to 40 minutes before the show is scheduled to begin. Then, roughly 10 minutes before the start time, guests are led from a queue area inside Seuss Landing (next to the Circus McGurkus quick-service restaurant) to a soundstage located between Islands of Adventure and Universal Studios Florida.

Generally, you're not allow to take photos backstage, but team members tend to be fairly lax about this restriction during the holidays. So be sure to look to your left as you're entering the clearing because you never know what (or who) you might spot.

Given the position of the bleacher seating in the soundstage, there really isn't a bad spot. That being said, here are a few tips on how best to enjoy this spectacular. First, if you have an animal lover in the family, sit on the right side of the stage. From here you will get a closer look at Max, the Grinch's dog, who is played by a real dog and a very cute one at that. Second, sitting on the right puts you a little closer to the Grinch's sleigh for the finale of the show.

Now, perhaps the most important tip of all: there are no restrooms available at the soundstage, so be sure everyone goes before you get in line.

Once the show is over, you'll exit back to the same area in Seuss Landing where you queued. There are no photo ops available after the show, but the cast does wander through Seuss Landing at many times during the day and, as mentioned earlier, the big green guy himself has his own scheduled photo op times in the Seuss Landing bookshop.

The Grinchmas™ Who-liday Spectacular runs every day, December 5 through January 2. Please check your in-park map for showtimes and more.

Don't confine yourself to a hotel—relax and visit all of Orlando with a Reunion Vacation Home as your home base! Call us at 1-855-453-5400 to learn more about our offerings.